Highways England is calling on drivers to reduce litter on the motorways as part of the Great British Spring Clean.

The Great British Spring Clean is delivered every year by Keep Britain Tidy, the aim is to reduce the amount of rubbish littering the country’s parks, beaches and streets.

As part of the campaign, Highways England is urging road users to save their litter for the bin.

In the run-up to the campaign Highways England has been working with various local authorities and litter groups.

For example, in the South East they have worked with Brighton and Hove and Adur and Worthing councils for a litter pick on the A27 at Southwick – over 138 bags of rubbish were collected.

In the Midlands, 70 bags of rubbish, a mattress and a 1,000-litre oil drum were collected from the A38 in Staffordshire when Highways England, Kier and East Staffordshire District Council took advantage of the road being closed for some utility works.

This year a number of Highways England colleagues will also be volunteering in their local communities. This includes Clare Ball, corporate customer engagement programme manager.

Clare said: ‘Its great to be a part of something to be proud of, making a difference in the environment around you for you and others to enjoy. I got my eight-year-old daughter, Grace, involved and she loved it and has been out litter picking several times since as it made her feel good through doing good.’

Freda Rashdi, Highways Englands head of customer and operational requirements, added:’Were urging road users to save litter for the bin.

‘The simple fact is that if litter wasnt dropped in the first place it wouldnt need to be picked up.Litter is not only unsightly and a risk to wildlife and the environment, but it also puts our workers at risk collecting it. It diverts time and money that could be better spent on improving the network.

‘Litter is an important national issue and were pleased to join with Keep Britain Tidy in urging people to take their litter home and help make a difference.’

I’ve been requesting for one slip road on M60 Jnct 11 to be cleaned up, end of motorway signs to be fixed and illuminated Etc for a number of years, only the other day, NWH stated inspectors found everything ok, does this sign look ok ? On the other side, shrubbery hides the end of motorway sign!

End on motorway signs not been illuminated for years, sign leans over for number of years, Driver Rubbish built up over a number of years! It’s as if they haven’t had this slip road maintained full stop!

Should have portable CCTV to catch the culprits throwing out cans, one driver must throw out the window the same flavour drink can at least 30 times, identify, charge and make example of in press! 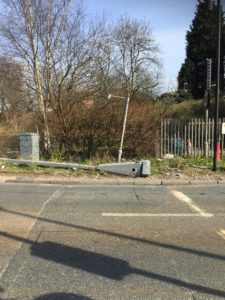