On June 7, an electric-scooter trial began in London, with operators Dott, Lime and TIER providing access to scooters across the capital.

At full capacity, each operator will be able to run a fleet of up to 6,600 e-scooters.

Using data from operations across 115 cities across Europe, TIER has estimated that the average utilisation rate is four rides per day, this equals nearly 29 million rides a year.

According to TIER, 17.3% of all trips taken on e-scooters replace car journeys. If all one-mile car trips across London were replaced with rental e-scooters then there would be a 233-tonne daily reduction in carbon dioxide (CO2) emissions, as well as significant improvements to air pollution. 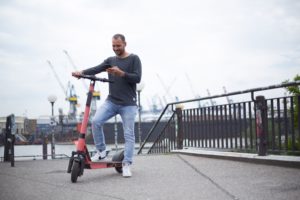 Silviya Barrett, head of policy, research and projects at Campaign for Better Transport said: ‘To combat a worrying rise in car use and air pollution post-pandemic, we need plenty of green travel options available in towns and cities to suit everyone’s needs.

‘Using e-scooters and other forms of micro-mobility in combination with London’s extensive public transport network in place of some journeys currently made by car can bring significant health and environmental benefits.’

TIER regional manager Fred Jones added: ‘The potential environmental benefits of switching from cars to e-scooters for short journeys are absolutely staggering when you think about the size and scale of London and the number of vehicles on the roads.

‘The Mayor is rightly committed to improving London’s air quality, and that’s what makes the launch of scooter schemes in the capital so exciting – it’s a unique opportunity to rethink urban transport in the capital and to reduce pollution levels.’

In related news, Marc Hudson, research associate at Keele University explains how e-scooters could disrupt travel as we know it.

OK for up to 40 year olds and the using them when the weathers fine, but what about when it’s racing, cold with ice on the ground, the pressure put onto the NHS for scooter related injuries? Including those on foot!

Hi. There are better ways of reducing Air Pollution. But sadly those in power do not know about them.
LPG has been on sale at filling stations since the 1970s. Its only 57 P per litre now. Government reduced the price by 50% in the 1970s. As did all governments.
BECAUSE IT IS VERY LOW IN EMISSIONS AND 80% LOWER IN CARBON AND CARBON MONOXIDE.
THE Duke of Edinburgh realising this. Had all the Royal family cars converted to LPG fuel. As did many councils and Taxis firms. Even so. Most so called experts pontificating about their grand ideas. Do not even know these facts.
In Europe. VW make and sell cars running on methane. The fuel our gas cookers use. There are over 1 million vehicles in Europe running on CNG which is methane.
I am certain 99% of you Experts do not even know that fact
METHAN DOES NOT CONTAIN CARBON.
I have run and used LPG cars for 46 years. Filling up at MORRISONS.
I have saved over £25000 doing so.
My car will run 150 miles for only £10 doing daily driving.
Face reality and use the best available low content carbon fuels.