Electric vehicles (EVs) have the same market share as diesel vehicles for the first time ever, according to data from the transport research organisation New AutoMotive.

This month’s figures for cars bought in June shows that pure electric vehicles account for 11% of the market – the same as diesel.

This equates to 16,000 fully electric vehicles being bought in June in the UK.

Regionally, the North East, London and the South East had the most EV registrations. In the North East, an average of 13% of all newly registered vehicles were electric. 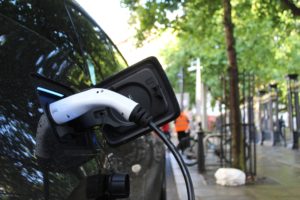 New AutoMotive have said they’re concerned with this growth of hybrid vehicles because they are not zero-emission. They are therefore calling for a California-style legislation that rewards manufacturers for selling electric cars rather than hybrids.

Despite these positive trends, petrol vehicles continued to outweigh electric and hybrid vehicles combined, making up a 55% share of the market.

Ben Nelmes, head of policy at New AutoMotive said: ‘Electric car sales saw strong growth in June, with one in ten new cars registered in the UK now fully electric, with zero emissions at the tailpipe.

‘While petrol remains the most popular fuel type, the growth of registrations of new hybrid vehicles is a concern. Hybrids are not zero-emissions cars, and the UK needs to see faster growth in zero emissions, fully electric cars to meet its net zero target.

‘Ministers should consider introducing a California-style scheme that would reward manufacturers for selling fully electric cars instead of hybrids. That would encourage more investment in EV manufacturing and production. This would benefit consumers, create jobs and reduce emissions.’

Good to read the article! Thank you for sharing the great content,
which is very essential for me to know more about the cars and the engines.
Here we provide, Get the best used car engines for sale in USA.
We are offering the used car engines all over the USA.

Thank You so much for the Awesome article. Why I used the word awesome because I read this article before 5 months and by following those points in this article I created a very good website for my car business and it helps me a lot. I think because of this article I improved my business
Thanks a lot,
keep giving lots of information to everyone…
https://www.autoparts-miles.com/used-SATURN-Astra-engines