Priority is being given permanently to buses, cyclists and pedestrians in Bristol after the Mayor declared that the trial closure of Bristol Bridge was a success.

Bus lanes were installed on Bristol Bridge, Baldwin Street and Union Street last summer with the goal of improving air quality and making it easier for people to use public or active transport.

Motorbikes and taxis can still use the bridge, and cars and other vehicles can still access Baldwin Street and Union Street using other routes, but they can no longer use these streets to pass through the city centre to get elsewhere.

Mayor Marvin Rees said: ‘The closure of Bristol Bridge is part of our bold vision to deliver clean air and transform travel in the city and I am delighted to make the change permanent after a successful trial. It has removed lots of polluting traffic from the central zone and improved bus punctuality and journey times, without causing significant problems elsewhere on the network.

‘By creating more space for public transport, we are paving the way for a mass transit system that will connect us all to jobs, leisure and each other. This decision takes us one step closer to a better, more inclusive future with cleaner air, safer and better public transport, and improved walking and cycling routes for everyone.’ 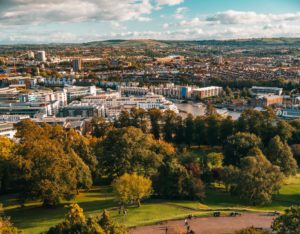 A new bus service was introduced by First West of England as a result of the bridge closure to traffic, which doubled the frequency of buses on the route, and the removal of traffic from the bridge has improved the punctuality of the buses, making them up to five minutes faster.

Doug Claringbold, managing director of First West of England, said: ‘When the pandemic struck it fundamentally changed people’s travel habits and presented a once in a lifetime opportunity to try and encourage the vital shift from normal car commuter patterns to more environmentally friendly and sustainable options.

‘The trial closure of Bristol Bridge to regular traffic was a move we warmly welcomed and I’m pleased to see Bristol City Council make this permanent with its announcement today.’

In related news, Toyota Motor Manufacturing and Derby City Council have signed a partnership agreement to explore, develop and deliver mobility solutions with the aim of tackling climate change.