Mr Treharne received the award in recognition of his work to implement a range of initiatives to clean up the capital’s air, which have included the T-Charge, as well as the early introduction of the Ultra Low Emission Zone which is due to come into effect from 2019. 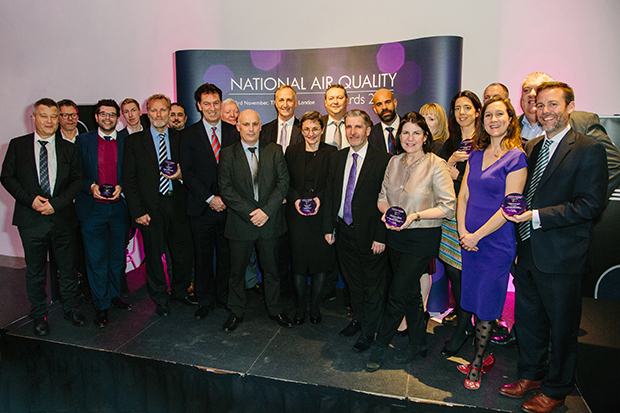 The awards, organised by AirQualityNews.com in partnership with Daimler Trucks, are now in their third year, and this year were held at The Crystal at London’s Royal Victoria Docks.

The ceremony followed on from the National Air Quality Conference at the same venue earlier in the day, which heard from speakers including ClientEarth, Leeds city council and Emissions Analytics.

Over 80 entries were put forward across the eight categories, which were whittled down to a shortlist of 33 by an expert judging panel. Judges included Anne Godfrey, Chief Executive, Chartered Institute of Environmental Health Claire Holman, Chair, Institute of Air Quality Management, Gloria Esposito, Head of Projects, Low Carbon Vehicle Partnership and Jonathan Bray, Director, Urban Transport Group and Will Date, Editor of AirQualityNews.com.

In the Local Authority Air Quality Initiative of the Year sponsored by Earthsense, Birmingham city council was named as the winner for its part in a project to convert 65 highly-polluting diesel black cabs to use LPG (liquefied petroleum gas) following a £500,000 award from the Department for Transport’s Clean Air Fund. The project has helped to establish a supply-chain for LPG in the local region.

The second category was the Innovation in Air Quality Technology Award, sponsored by fleet management and telematics specialist Trakm8, which was won by Amminex, for its ASDS Systems which use gaseous ammonia to combat NOx pollution from commercial vehicles. 55 metroline buses in London have been fitted with the technology.

Elsewhere, Go-Ahead London was named as the winner in the Passenger Transport Air Quality Award, which was supported by Toyota, for its work to introduce electric buses to its Waterloo bus garage. The work saw charging infrastructure installed allowing the introduction of electric buses on the 507 and 521 bus routes, which have resulted in 685,000 cleaner road miles operated.

In the Freight Transport Air Quality Initiative of the year, sponsored by Mercedes-Benz and FUSO, Cross River Partnership was recognised for its trans-national trans-national Freight Electric Vehicles in Urban Europe (FREVUE) project, which has tested 80 fully electric freight vehicles across eight European cities.

Industrial vehicle specialist IVECO was crowned the Leader in Low Emission Vehicles, supported by Lambda, for its work to supply low emission vehicles to the commercial sector – including gas and electric powered models.

The first ever National Clean Air Day, which was coordinated by the behaviour change charity Global Action Plan, alongside a host of partners was named as the Air Quality Communications Initiative of the Year. Taking place on 15 June, the initiative saw more than 200 individual events taking place nationwide, more than 550 press, radio and TV features and over 28,000 tweets helping to raise awareness of air pollution.

In the Commercial Sector Air Quality Initiative of the Year sponsored by Videalert and Imperial, Perpetual V2G Systems took home the gong for its LPS System, a power system for vehicle refrigeration units which reduces the need for diesel power generators.

The last award of the night was the Air Quality Champion, sponsored by Calor, which was awarded to Elliot Treharne of the Greater London Authority, who saw off close competition from the Sunday Times’ science editor Jonathan Leake, Peter Dyment of Camfil and Keith Johnston of ConsultEV.

Air Quality Communications Initiative of the Year, sponsored by AirQualityNews.com