Local government leaders from 16 of the UK’s largest cities have issued a wishlist to government for actions required to tackle air pollution. 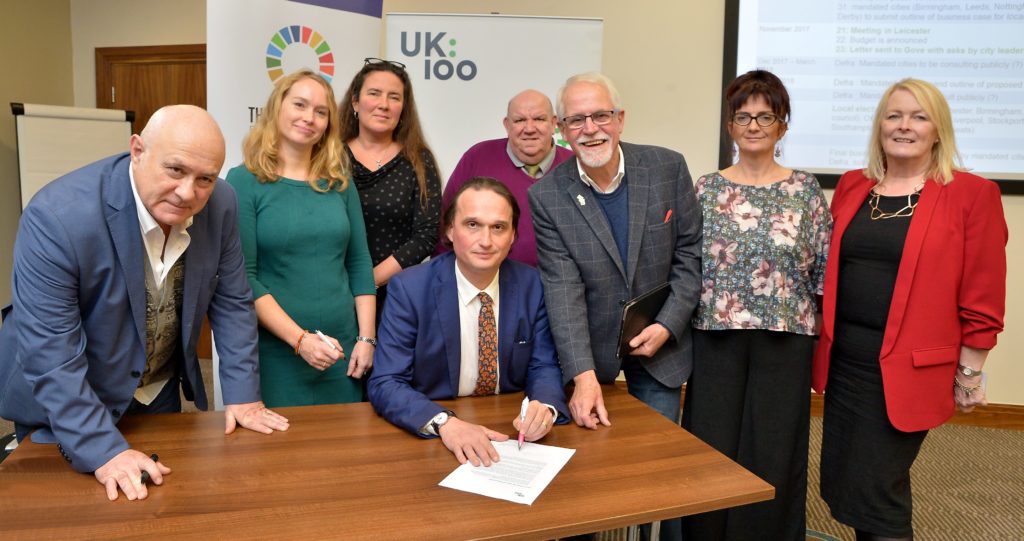 The five-point plan was agreed at a summit in Leicester last week (21 November) hosted by the UK100 local government network and attended by representatives of each of the local authorities and environmental law charity ClientEarth.

Measures endorsed in the letter include incentives for diesel drivers to switch to low emission vehicles, support for a network of Clean Air Zones in towns and cities alongside resources to procure cleaner bus technology, as well as increased effort to address air pollution from freight operators.

Additionally, the city leaders have called for the development of a national database to register taxis and private hire vehicles to ensure that they are recognised by number plate recognition systems, and that they are obliged to be licenced where they operate.

At present some local authorities are seeking to target emissions from taxi and private hire fleets by toughening requirements for taxi drivers to introduce low emission vehicles into their vehicle fleets.

However, as drivers can opt to register vehicles with other licencing authorities – it can be difficult for authorities to ensure that all vehicles operating within their catchment area are working to the same standard.

In a letter accompanying the proposals, sent on Thursday (23 November) directly-elected Mayor of Leicester Sir Peter Soulsby – who hosted the Summit in his city – wrote: “The measures we hoped for in the Budget, such as a diesel scrappage scheme to support drivers on low incomes and with small businesses, did not appear.

“Cities across the UK are acting locally to tackle air pollution: for example introducing cleaner buses, offering cheaper parking to EVs, making cycling easier and more attractive, leading anti-idling campaigns, and designing our traffic systems to avoid the worst build-up of pollutants. But we can see from our local monitoring and modelling that this will not be enough. We need to work more closely with you as Secretary of State to establish a national framework for our efforts.”

UK100 has claimed that there is a ‘growing national consensus’ for action to tackle air pollution, and has called for ‘joined-up’ action from government to address the issue.

The organisation’s director Polly Billington, added: “The goal of the UK100 Campaign on Clean Air is to translate the growing public demand for political action on clean air to Members of Parliament and to the UK Government.

“We want to draw attention to the work of local leaders who are improving air quality and the businesses that are supporting them. By working across civil society, the public sector and business we campaign for legislation that enshrines the right to breathe clean air into law and makes the UK a world-leader in clean technologies and solutions.”