The authority had originally preferred a Class D CAZ, which would charge all higher emission vehicles, including cars, to drive in the city centre.

However, following a public consultation in December that garnered 8,400 responses, it was decided that a Class C option would be preferred as it would also meet compliance on emissions.

Charges are set to be £100 a day for buses, coaches and HGVs and £9 for LGVs/vans, private hire vehicles and taxis.

The council has also given a ‘firm commitment’ to financial assistance in the shape of interest-free loans to help businesses upgrade pre-Euro 6 commercial vehicles. Businesses with Euro 4 or 5 diesel commercial vehicles unable to obtain a loan would be able to apply for a concession to 1 January 2023.

The council is also asking the government for funds to support grants of £2,000 to help households upgrade pre-Euro 4 cars. 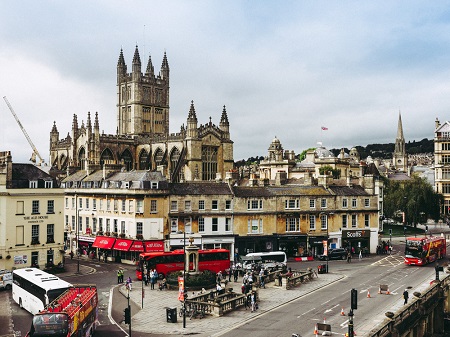 Mark Shelford, cabinet member for transport and environment, said: ‘This has been a crucially important decision and I believe we have the right clean air plan for our city that exempts cars from charges, safeguards the long-term health of people and meets the needs of our busy, vibrant city.

‘Our immediate step now is to write to government confirming our decision and to seek the funding we need to deliver this plan.

‘Levels of pollution we know will drop as cleaner vehicles come onto the market, already First Bus is retrofitting vehicles, which means this is an ever-changing picture and one we will continue to monitor to ensure the zone meets the city’s needs.’

Motoring journalist Quentin Willson, who is behind campaign group Fair Fuel UK, wrote an open letter to Bath councillors ahead of the decision, which said the CAZ will ‘impact severely on Bath’s economy, deter consumer spending in the city and reduce tourism.’

‘By charging unfairly, those targeted vehicles to enter your controlled zone and deterring them free entry, will be a totally ineffective way to lower emissions,’ it continued.

‘What such a regressive tax policy will most certainly do however, is to economically hit hardest, low income drivers, small businesses and the haulage industry.’

Bids for central government funding will now begin with the Zone set to come into force from December 2020.

In related news, Southampton City Council also recently decided against introducing a charging zone for private vehicles and instead proposed other measures aimed at curbing emissions.

The Greater Manchester Combined Authority last month unveiled their plans for a CAZ, which will also give private cars an exemption from charges.