The four new air-conditioned electric trains have been brought in to replace older diesel trains, making them better for air quality and the environment.

The Mayor of London Sadiq Khan and TfL have offered passengers a free month of travel on the trains in September to thank regular users of the line after the trains’ introduction was delayed.

Heidi Alexander, London’s deputy mayor for transport, said: ‘I’m delighted that the new electric trains are now fully in operation on the Gospel Oak to Barking line – doubling capacity for passengers, providing free WiFi and improving air quality for everyone. 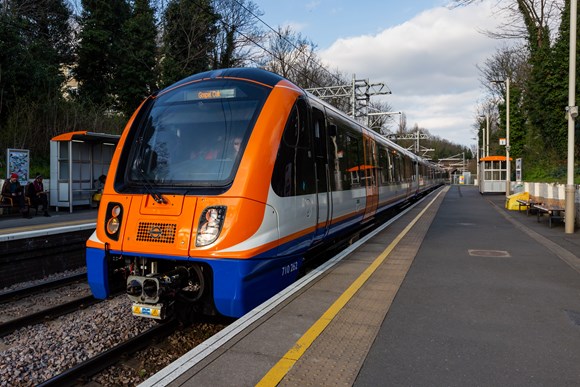 ‘The month’s free travel, which was requested by the Mayor, is a well-deserved thank you to passengers for their patience, and we have made it as simple as possible for people to benefit from this offer.’

The first of the new trains began carrying passengers in late May, while the others have been tested over the summer.

All four trains have now been brought into service to bring the Gospel Oak to Barking line – which is used by 30,000 people a day – back up to its full capacity of four trains an hour.

The free month’s travel for passengers will be funded by Bombardier and will be available from August 31 to October 1 inclusive.

Jon Fox, TfL’s Director of Rail, said: ‘We’re pleased that all of the new electric trains are now in service on the Gospel Oak to Barking line, and are delivering the greater capacity and more pleasant journeys customers have been waiting for.’

TfL’s move towards electric trains on its lines is welcome as diesel trains’ contribution to air pollution becomes better understood.

The researchers said the high levels in the two train stations were ‘principally’ due to emissions from diesel trains.