In October 2018, the authority was one of 58 directed by the government to carry out feasibility studies for measures that cut nitrogen dioxide (NO2) ‘in the shortest possible time,’ which included a requirement to consider a CAZ.

Following this, Leicester City Council announced plans to introduce a CAZ that would have charged the most polluting taxis £8 per day and buses £50 per day to enter the inner ring road.

However, the CAZ has now officially been scrapped because according to the council, the Air Quality Action Plan introduced 2015, has led to a seen a significant improvement in air quality. 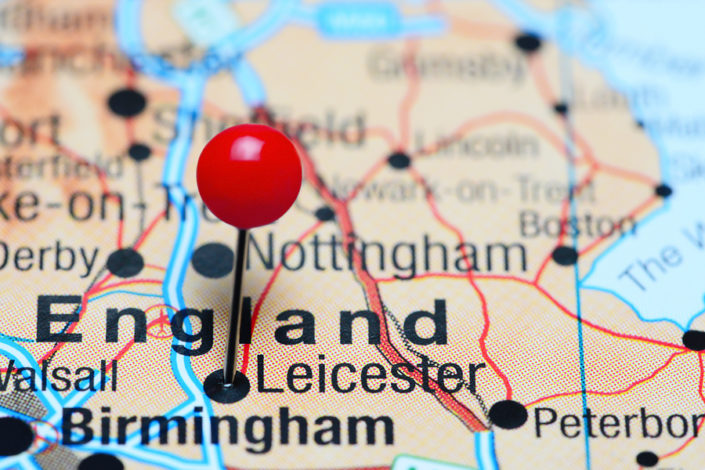 Leicester pinned on a map of UK

A city council spokesperson said: ‘In 2018, along with several other local authorities, we were directed by the Government to develop a plan that would make Leicester compliant with EU nitrogen dioxide levels in the shortest possible time.

‘At the time, the Government favoured a clean air zone as the most effective way of doing this.

‘However, since the implementation of our Air Quality Action Plan in Leicester in 2015, there have been huge improvements in our air quality. Because of the improvements we have made, Government are now unlikely to fund the development of a clean air zone.

‘Air quality improvements are measured in numerous ways, including through an extensive network of over 50 monitors spread throughout the city.

‘We are currently meeting with Government to finalise our plans to further improve air quality in Leicester, which we will be submitting to them in the next few weeks.”

‘We also have an agreement with bus companies so that the city’s buses meet or exceed Euro 6 – the highest standard for NO2 emissions in diesel engines – and we are electrifying our park and ride bus fleet.’

Please provide a link to the source of your story.