The heat is on

The installation of gas boilers in new homes is set to end in 2025, but what will replace them? Jamie Hailstone investigates.

In just four years’ time, the way in which we heat our homes will change forever. This is very good news for campaigners who have long called for households to be less environmentally polluting, but there is a snag.

For while the government has repeatedly said gas and oil boilers will be banned in newbuild homes from 2025, it still remains far from clear what will actually replace them.

The ban actually dates back to March 2019, when the-then chancellor Phillip Hammond confirmed gas boilers will be replaced by low-carbon heating systems in all new homes built after 2025.

In September 2019, prime minister Boris Johnson reiterated the commitment as part of the ‘Future Homes Standard’.
And according to the government’s energy white paper, published in December last year, ministers are looking to consult on the role of ‘hydrogen ready’ heating appliances this year. The white paper also states that gas boilers in existing homes will be gradually phased out and it highlights the role of heat networks and other low carbon technologies in helping to reduce emissions.

The situation has been further complicated by the withdrawal of the government’s Green Homes Grant voucher scheme in March to help fund energy efficiency improvements, like heat pumps – just six months after the scheme had been launched. 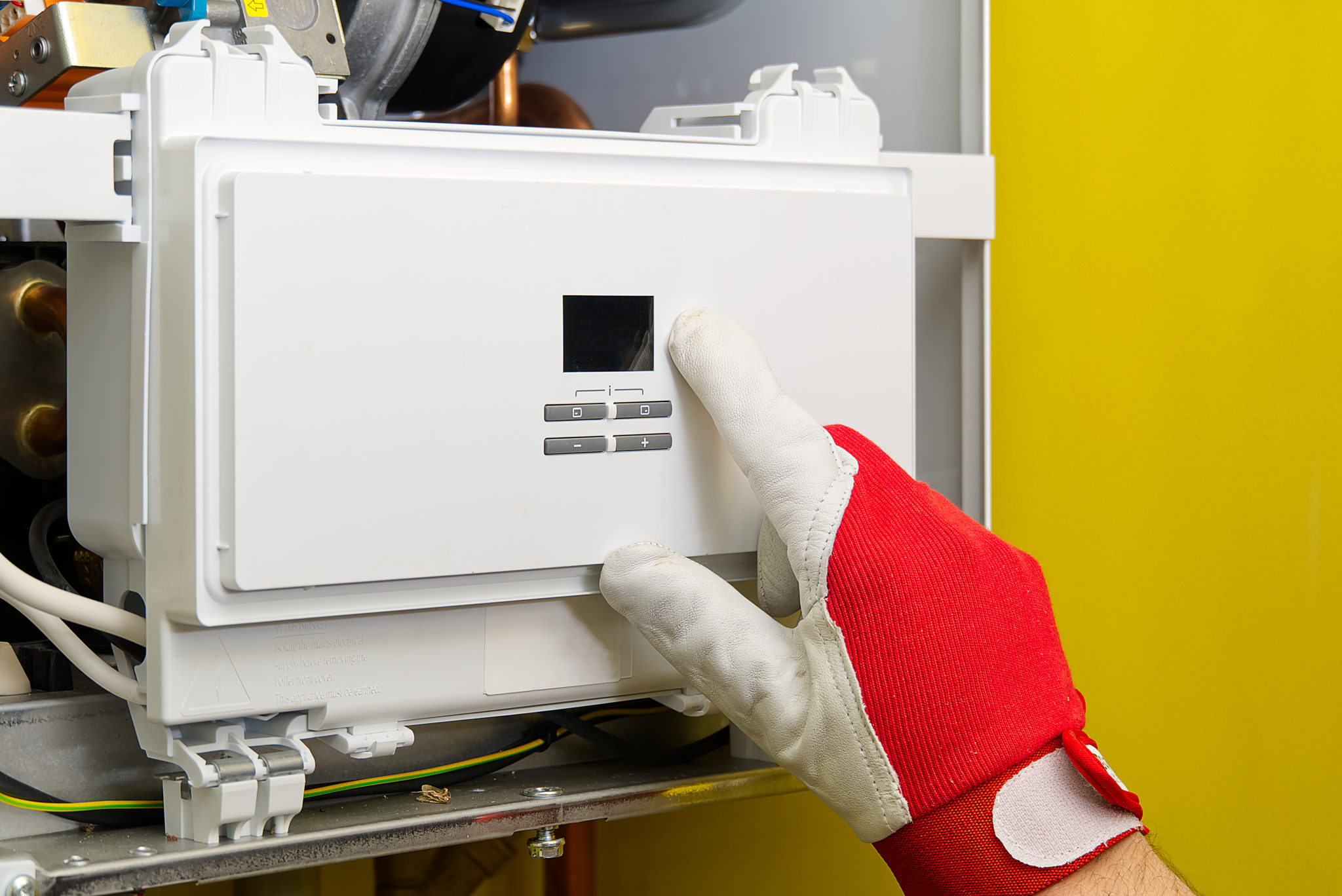 The fact remains that at the time of writing (April 2021), no clear roadmap exists for what housebuilders and developers should do in 2025 or how the industry should prepare for such a momentous change.

It remains unclear whether the government will back a full switch to hydrogen, heat pumps or other forms of low carbon heating, or leave it up to developers to decide which is best.

In one corner, a powerful lobby is growing around switching to hydrogen, or to be precise a blend of hydrogen and gas to heat new homes from 2025 onwards.

In March, the Heating and Hotwater Industry Council (HHIC) wrote to Boris Johnson, confirming they have reached agreement in principle with UK boiler manufacturers that they will support any future legislation which mandates all new models of domestic boilers to be ‘hydrogen-ready’ from 2025.

‘HHIC has already developed a specification with industry detailing what a ‘hydrogen-ready’ boiler is. In short, it means boilers already in homes will need under an hour of adjustment to allow a future switch from natural gas to hydrogen,’ says HHIC director, Stewart Clements.
‘The government can then confirm in their upcoming heat decarbonisation plan and hydrogen strategy that it has the long-term plan to repurpose current gas networks for hydrogen as a key tool to achieving zero carbon heating for over four-in-five UK homes currently using natural gas.

‘Hydrogen-ready boilers are the least disruptive means of decarbonising homes as they offer the opportunity for people to continue to heat, cook and use hot water in the same way they do today, without ripping out pipes, boilers, and in some cases floors. Using the existing world-class gas network infrastructure will also be the most cost-effective solution to decarbonisation.’

However, not everyone is convinced the future lies in a mass rollout of hydrogen boilers to new homes. Dave Pearson, managing director of Star Renewable Energy says he believes the government should just make it the law that all new single-family dwellings are heated with heat pumps instead.

‘Gas is just dumb and we need to move away from it as soon as possible in terms of our carbon footprint,’ Mr Pearson tells Air Quality News. ‘Hydrogen is not going to turn up anytime soon.

He adds the ‘notion’ that hydrogen is as cost effective as running a heat pump is just ‘nuts’.
‘You can take one kilowatt hour of hard-to-make electricity from an offshore wind farm and then make it hydrogen via electrolysis, then you send that hydrogen down a pipe, which will have to be replaced.

And Chris Connon, senior manager of heat at EDF, says air source heat pumps are a viable alternative to boilers.

‘Air source heat pumps (ASHP) are a highly efficient way to heat your home that can offer both carbon and financial savings in comparison to a traditional gas-fuelled boiler,’ says Mr Connon.

‘ASHPs can be up to four times more efficient than a gas boiler, meaning running costs can be far lower, a typical three-bed household could save £2,755 over 10 years with an ASHP. Their long-service life also makes them more cost effective than traditional boilers that need to be replaced more often.

‘ASHPs are also a far more environmentally friendly way to heat your home than traditional gas boilers, as installing one could cut your household carbon emissions by 23.36 tonnes of CO2 over 10 years. What’s more, customers can also take advantage of EDF’s zero carbon electricity supply.

‘Now is a great time to consider installing an ASHP, as owning one makes you eligible for the government’s Renewable Heat Incentive Scheme – which offers a financial incentive to replace oil and gas central heating systems with renewable heating systems. In a nutshell, this means that you get money for the energy your renewable system generates over a period of seven years,’ adds Mr Connon.

But the heat pump market in the UK remains very small. A recent report by the University of Sussex found that the UK is lagging behind other countries in their roll out. For example, in Finland, a country of just over three million households, an estimated 1,030,000 heat pumps have been sold. By comparison, less than 200,000 heat pumps are thought to have been installed in the UK since 2000.

The Department for Business, Energy and Industrial Strategy (BEIS) is expected to deliver its strategy for heat and buildings decarbonisation in the next few months, which should clarify matters.

But a recent expert panel organised by heating manufacturer Baxi Heating highlighted the need for government and industry to engage consumers and provide a much-needed roadmap.

The panel’s widely held view was that it was becoming essential to explain the benefits and transition path to new forms of low-carbon heat, namely hydrogen boilers, heat pumps and heat networks.

The panellists highlighted many challenges still faced by the industry, including upskilling heating engineers to be able to install new low-carbon heating and hot water technologies.

Although the mix of low carbon technologies and its implementation has much further to go panellists agreed it was critical to deliver clear-cut solutions to meet the energy needs for the wide variety of buildings in the UK. To be successful, it was emphasised that now is the time for action in order to deliver a sustainable future for generations to come.

‘Making low carbon solutions readily available, ensuring there is a rich body of professionals to install them, and engaging the general public will be key to starting this progress,’ says Karen Boswell, managing director of Baxi UK & Ireland.

‘We can’t wait for a single, clear-cut solution that will likely never arise. Right now, we must get consumers and industry professionals on side to support the solutions, training and new services that are needed long into the future.’

Perhaps understandably, the ministers at BEIS and other Whitehall departments have a lot on their plates at the moment. But the clock is ticking and with 2025 getting ever closer, the entire heating industry is on tenterhooks, waiting for clarification on how it should prepare for the low carbon future.

Are microwave boilers the answer?

Another alternative to low-carbon heating could be boilers that use microwaves to heat water.
A British start-up Heat Wayv recently unveiled its plans for a microwave boiler that it claims could reduce CO2 emissions from homes by up to 24%.

The firm’s boilers use technology similar to that found in kitchen microwave ovens – using a specific frequency to transfer energy to individual water molecules and so heat the water.
The boilers are in the engineering design stage at the moment and not available yet, but the company is aiming to have them ready for installation before 2025.

‘The end of the gas boiler is inevitable and scheduled,’ says co-founder Phil Stevens. ‘But the proposed replacement technologies do not work for consumers as they are either too expensive to install or too expensive to run. We looked for a clean technology where the boiler would cost the consumer the same to buy, same to install and same to run as a gas boiler.
‘The answer is the microwave boiler as it is a trusted technology in our homes already and one that can be brought to market before the 2025 gas boiler shut-down begins.’

This article first appeared in the Air Quality News magazine which is available to view here.