Transport for London (TfL) is consulting on new proposals to cut congestion on London’s red routes.

London’s red routes makeup 5% of roads but carry 30% of traffic.

Under the new proposals, fines for breaking rules would increase to £130 – £160.

The fines would be issued for:

TfL has highlighted that failing to follow rules and signs at junctions creates safety risks, disrupts traffic and creates congestions. 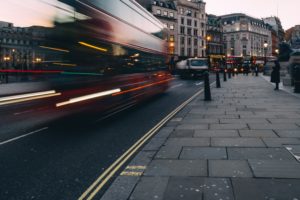 The cost of fines for contraventions on the red route network has not increased for over ten years.

TfL has said they expect the higher fine level to be a more effective deterrent that will, over time, lead to a reduced level of contraventions and help to keep the road network safe for everyone.

TfL’s consultation is now open at haveyoursay.tfl.gov.uk/penalty-charge-2021 and runs until 19 September.

Siwan Hayward, TfL’s director of compliance and policing, said: ’London’s network of red routes plays a vital role in keeping people moving across the capital and it’s really important that everybody follows the rules that are in place to keep roads clear and to keep people safe.

‘We’d much rather people follow the rules than fine them, and the proposed increase in fines is intended to increase compliance with the rules and make streets safer, cleaner and less congested for everyone. I’d urge people to have their say on these proposals and we welcome all feedback on our plans.’