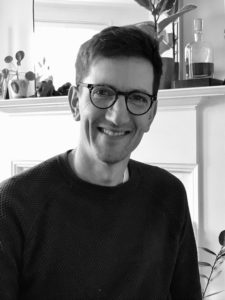 Today taxi services account for between 10% and 20% of urban traffic in cities despite only representing a small percentage of the number of vehicles on the roads.

Campaign group Transport & Environment estimates that Uber operations in the urban areas of London, Paris, and Brussels contribute around 525 kt of CO2 per year – as much as a quarter of a million cars.

‘Obviously, that’s a long way in the future,’ says Chris, ‘but our Clean Air Plan in the UK is the first step towards this goal.

‘As a business that relies on moving people around in cars, the main way that we can reach net-zero is through electric vehicles.’

According to Chris, there are currently around 2,000 electric Ubers in London. For context, there are 45,000 Uber vehicles in the capital in total.

‘When I joined the company in 2019 we had about 100 electric vehicles,’ explains Chris.

‘2,000 is a good start but it is by no means our final goal, these things take time. People don’t change their car every month, but it’s our job to ensure that every time someone is changing their vehicle, they’re going electric.’ 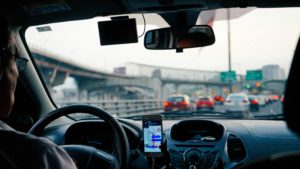 Uber currently has various strategies in place to accelerate the uptake of electric vehicles, most notably the Clean Air Fee. This is a scheme whereby a small surge charge is added to every trip and then when the driver wants to purchase, rent or finance an electric vehicle, they can use that money.

‘We’ve got to the point now where for drivers this makes up quite a substantial sum of money, on average around £3,000.’

However, speaking with Chris it is clear that at the moment Uber’s clean air plans are very London-centric.

When asked why this is the case, Chris explains: ‘In London, the Mayor has done a lot of work to encourage the uptake of EVs, particularly amongst professional drivers. The congestion charge and to a lesser extent the ULEZ are really strong incentives to encourage people to go electric.’

Chris explains that even though other cities have introduced Clean Air Zones, they don’t go as far as London’s Ultra Low Emission Zone and so the incentive to switch to electric isn’t strong enough. 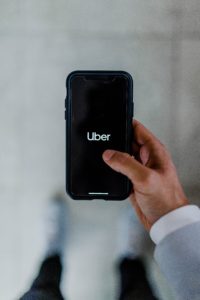 ‘One of the reasons the Clean Air Fee is possible in London is because there are other factors that are also helping people get financial parity.

‘Broadly speaking, wherever you are in the country the cost of the car and the cost of fuel is the same, but the big difference is the charges.

‘If you’re not driving an electric vehicle in London you have to spend £15 to get into the city, and if you’re in an older more polluting vehicle then you’re spending a further £12.50 on the ULEZ. If you do trips every day, that is a lot of money.

‘The Clean Air Zones do work effectively. For example, the Bath CAZ really helps to disincentivise buying an old diesel car, because you have this same situation where you would now be spending £9 a day to drive into the city.

‘But at that point, you’ve got a choice, you could buy a Toyota Prius and you wouldn’t have to pay any of that money, or you could buy an EV and it’s still free for you.

‘The Toyota Prius probably costs around £15,000 less than the EV and so you’d probably choose the Prius.’

Therefore, according to Chris, until all cities charge drivers for driving anything but an electric vehicle, the incentivisation from Uber is not worthwhile.

In London, Uber has to pay the ULEZ fee but black cabs don’t. This is because black cabs are legally obliged to use a certain type of vehicle that is purpose-designed for London’s street network and fully accessible to wheelchair users.

According to Chris, the more you make exceptions the more it erodes the value of the scheme: ‘We would always advocate for clear progression over time, the standards should get higher and stricter and vehicles should be polluting less and less, and that should apply as widely as possible.’

One of the main environmental concerns when it comes to Uber versus other passenger vehicles is their carbon footprint. According to a report published in 2020, a solo ride-hailing trip emits on average nearly 50% more CO2 than one in a private vehicle.

This is due to the fact that drivers spend a significant amount of time without a passenger.

‘The comparison against private cars is a fair one,’ says Chris, ‘Although there is some complexity in terms of how the cars are used, given the emissions it takes to produce them. But I do think it’s important that we compare ourselves against all other options out there and question, is Uber being as efficient as it could be compared to cabs or buses.

‘With the fleet we have today, I’m confident that we’re ahead of the general population in terms of EV adoption. A key point of success for me personally will be if we can reach a point where EVs are not just a minority pursuit or something that only rich people can afford, but instead, they are a workable technology for all levels of society.

‘We will only hit our societal targets if we can make electric vehicles something for everyone, not just a minority sport.’