Five airports emit more CO2 than the whole of Sweden

The tracker, created by ODI, Transport & Environment and the International Council on Clean Transportation (ICCT), uncovers, for the first time, precisely how much CO2 is released from planes leaving airports.

Passenger flights departing London Heathrow, Paris Charles de Gaulle, Frankfurt, Amsterdam Schiphol and Madrid Barajas emit 53 million tonnes of CO2 which is exempt from fuel tax and of which less than 15% is priced into the EU and UK’s cap and trade schemes.

These schemes include domestic and EU flights only, meaning flights leaving Europe are not covered.

80% of Paris Charles de Gaulle’s emissions, for example, come from long-haul flights, whereas the majority departing from smaller airports such as Krakow are short-haul.

Pollution from smaller airports is therefore taxed more than those from larger ones which cater for longer, higher-emitting flights. 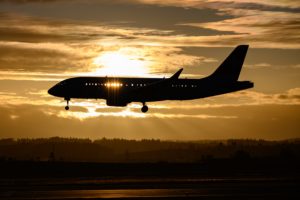 Jo Dardenne, aviation manager at T&E, said: ‘Unlike cars or power stations, most flight emissions are released outside of Europe’s borders, leaving the vast bulk of emissions from European airports scandalously overlooked. All flights should be included in the emission trading system, not just the ones within Europe.

‘We can now see the alarming extent of airport emissions and it is clear that the aviation sector isn’t doing enough to curb its pollution. We cannot justify airport expansion in this time of climate crisis.’

All of the major airports mentioned have plans for expansion, most notably Heathrow. Heathrow airport – whose planned expansion has recently been delayed due to Covid – is responsible for the second-largest airport emissions in the world. Its 16.2 million tonnes of CO2 each year is equivalent to that of 8.1 million cars.

These undocumented and untaxed carbon emissions are important when considering airport expansions, says the coalition of NGOs. Emissions from the aviation sector grew 5% per year from 2013 to 2018 reaching 2.5% of global CO2 emissions – the 7th biggest emitter globally if it were a country.