A new Simon Armitage poem on display at the University of Sheffield has been printed on material specially developed to help reduce nitrogen dioxide levels in the atmosphere.

According to the University, the ‘catalytic’ poem entitled ‘In Praise of Clean Air’ (see below) has been printed on a 10x20m piece of material containing a formula invented at the institution which is capable of purifying its surroundings. 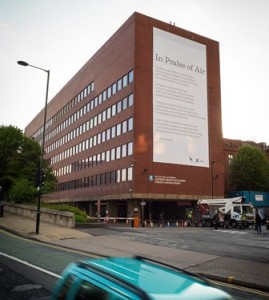 And, the University said, the ‘cheap’ technology could also be applied to billboards and advertisements alongside congested roads to cut pollution.

Armitage, who is professor of poetry at the University, worked on the project with Pro-Vice-Chancellor for Science, Professor Tony Ryan.

Professor Ryan has been campaigning have his ingredient added to washing detergent in the UK as part of his Catalytic Clothing project. If manufacturers added it, he claims, the UK would meet one of its air quality targets.

Professor Ryan, who devised the idea of using treated materials to cleanse the air, said: “This is a fun collaboration between science and the arts to highlight a very serious issue of poor air quality in our towns and cities.

“The science behind this is an additive which delivers a real environmental benefit that could actually help cut disease and save lives. This poem alone will eradicate the nitrogen oxide pollution created by about 20 cars every day.”

He added: “If every banner, flag or advertising poster in the country did this, we’d have much better air quality. It would add less than £100 to the cost of a poster and would turn advertisements into catalysts in more ways than one. The countless thousands of poster sites that are selling us cars beside our roads could be cleaning up emissions at the same time.”

According to Professor Ryan, Catalytic Clothing harnesses a ‘photocatalyst’ to use sunshine and oxygen to break down airborne pollutants. A catalyst is something that makes a reaction proceed at a greater rate but is not actually consumed during that reaction, while a photocatalyst gains the energy it needs to be active from light.

When light shines on the photocatalyst, electrons in the material react with oxygen in the air to form reactive molecules, which then react with water to oxidise the pollutants, turning them into harmless molecules that can be washed away. Through this process, nitrogen oxides are converted into soluble nitrate and volatile organic compounds (VOCs) are converted into fatty acids and soaps.

The poem will be on display on the side of the University’s Alfred Denny Building, Western Bank, for one year and its unveiling also marks the launch of this year’s Sheffield Lyric Festival which takes place later in May at the University’s Firth Hall.

Armitage will read the poem for the first time at a special launch event tomorrow (May 15) and Professor Ryan will explain the technology behind the material. A version of the poem will also be showcased during a late night exhibition at the Natural History Museum in London on June 11.

‘In Praise of Air’ by Simon Armitage

I write in praise of air. I was six or five
when a conjurer opened my knotted fist
and I held in my palm the whole of the sky.
I’ve carried it with me ever since.

Let air be a major god, its being
and touch, its breast-milk always tilted
to the lips. Both dragonfly and Boeing
dangle in its see-through nothingness…

Among the jumbled bric-a-brac I keep
a padlocked treasure-chest of empty space,
and on days when thoughts are fuddled with smog
or civilization crosses the street

with a white handkerchief over its mouth
and cars blow kisses to our lips from theirs
I turn the key, throw back the lid, breathe deep.
My first word, everyone’s  first word, was air.