Air quality is improving across Edinburgh, according to a report published by the city council this week.

Assessment of nitrogen dioxide (NO₂) data from different parts of the capital shows a general improvement during 2013. 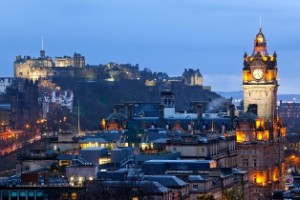 Edinburgh’s air quality is improving, the city council has claimed

Monitoring of the pollutant, which is commonly associated with road traffic exhaust emissions, has confirmed a positive trend throughout the city’s Air Quality Management Areas (AQMAs), the council claims.

A report to the Transport and Environment Committee details the results of the council’s annual Air Quality Progress Report to the Scottish Government, Scottish Environment Protection Agency (SEPA) and the Department for Environment Food and Rural Affairs.

The assessment focuses on the city’s five AQMAs, designated due to elevated concentrations of nitrogen dioxide in the vicinity. These are: City Centre, St John’s Road, Great Junction Street, Newbridge and Inverleith.

Amongst the areas of improvement are St John’s Road, where hourly average NO₂ levels fell to their lowest since measurement began, and the Great Junction Street AQMA, including Commercial Street and Bernard Street.

Changes to levels of pollution have in part been attributed to efforts by Lothian Buses to introduce cleaner buses to routes, including low emission and hybrid vehicles. With buses contributing a high proportion of NO₂ to each area, improving the emission standards of the city’s fleet will undoubtedly have a significant impact on the air quality of AQMAs.

It is also hoped that proposed amendments to traffic management at Newbridge could reduce queuing on the A8 and therefore lower NO₂ levels, and plans are now underway to secure funding for the alterations.

But while air quality is generally getting better, the report still shows areas for improvement. As a result it has been recommended that the AQMA for the city centre is extended to cover part of the South Bridge/Nicolson Street corridor to the south and at Angle Park Terrace/Slateford Road in the west, where, in parts, NO₂ levels have exceeded national standards. The extensions will allow appropriate actions to be taken to improve air quality in these areas.

Commenting on the findings, Edinburgh’s environment Convener, councillor Lesley Hinds, said: “Monitoring carried out allows us to see the invisible effects traffic has on our environment, but I am heartened by the general positive trend in air quality.

“Work carried out by bus and freight companies is having an undoubted impact on emissions, and I am certain that our approach to integrated transport will continue to have an effect.

“However, it is clear that there is still a lot to be done to reduce harmful emissions in Edinburgh, creating a cleaner, greener city for everyone, and we are committed to continuing this work with partners.”