The currently closed for motor vehicles Hammersmith Bridge should become a permament walking and cycling hub, which would have a positive knock-on effect on local air quality, campaigners have argued.

Last weekend over 100 healthy streets enthusiasts took over the suspension bridge to celebrate its potential as a permanent ‘garden bridge.’

Campaigners say that the 19th-century bridge could become an ‘inspiring part of the Thames path,’ attracting walkers and cyclists from across London.

Marco Picardi, co-founder of London Car Free Day, said: ‘This bridge was never built for heavy vehicular traffic, and we now have the opportunity to create a world-class walking and cycling link across the Thames.

‘We think trialling the bridge as a landscaped walking and cycling connection through the summer months could really provide a great boost for local businesses in Hammersmith and south of the river.’ 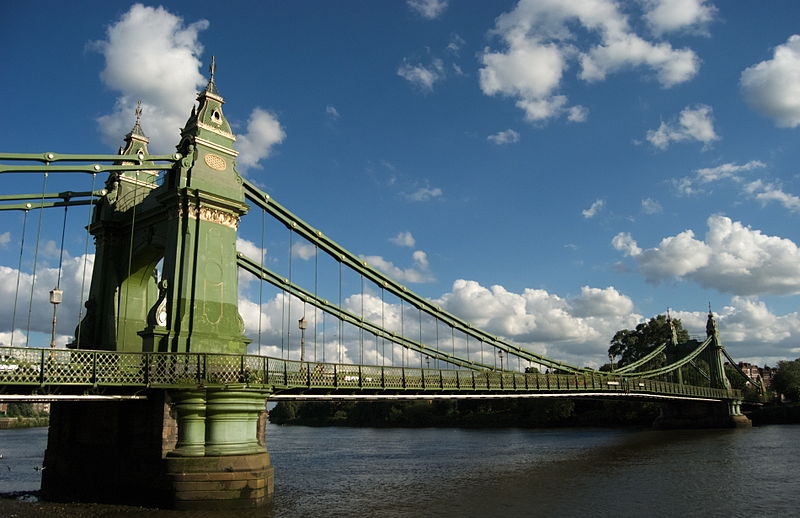 Hammersmith Bridge, which was built in 1877, has been closed indefinitely to motor vehicles since last month due to structural flaws, meaning that only pedestrians and cyclists are currently allowed to cross it.

When it was open to traffic, over 20,000 vehicles passed over Hammersmith Bridge every day – a very high volume of traffic, given the bridge’s age.

Supporters say the closure of the bridge could be the chance to trial its use as a new walking and cycling link across the Thames ahead of World Car Free Day on 22 September.

The advantages of this would include cleaner air and the protection of local school children and their parents from pollution from bridge traffic, they say.

Casey Abaraonye, coordinator at Hammersmith and Fulham Cyclists, said: ‘Trialling the bridge as a walking and cycling link during the warm summer months is a great idea – let people enjoy this unique piece of London architecture while being active.’

‘Local schools would also benefit from cleaner air – who wouldn’t want to walk or cycle to school across a beautiful, landscaped bridge?’

The campaign is already picking up pace, as the design and placemaking firm WATG has drawn up an artist’s impression of the bridge as a garden bridge.

The firm said that Hammersmith Bridge could become ‘a showcase of London’s globally significant landscape architecture and horticultural prowess’.

Critics of the campaign say that since Hammersmith Bridge has closed, road traffic has moved to other nearby bridges, increasing air pollution in those areas.

Despite these criticisms, London Air data analysed by a recent blog suggests that pollution levels in the surrounding areas have not drastically changed.