Forest fires in the Amazon released more energy than some of the world’s most polluting countries, according to a new study conducted by researchers at the University of Lancaster.

Triggered by the 2015-2016 El Niño, a climate pattern that describes the unusual warming of surface waters in the eastern equatorial Pacific Ocean, 2.5 billion trees and plants emitted 495 million tonnes of CO2 from an area that makes up just 1.2% of the entire Amazon rainforest.

The total carbon emissions were higher than a whole year’s worth of deforestation and were equal to the amount of carbon emitted by the UK or Australia over a three year period.

After three years, only around a third (37%) of these emissions were re-absorbed by plant growth in the forest. 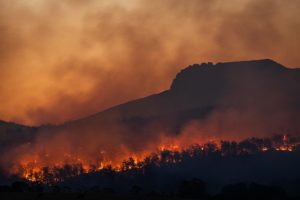 Dr Erika Berenguer, the lead author of the report from Lancaster University and the University of Oxford, said: ‘Our results highlight the enormously damaging and long-lasting effects fires can cause in Amazonian forests, an ecosystem that did not co-evolve with fires as a regular pressure.’

In normal circumstances, because of high moisture levels, the Amazon rainforest does not burn. However, extreme drought makes the forest temporarily flammable and fires started by farmers can quickly become out of control.

Based on this, the authors have highlighted how interference by people can make the Amazon forests more vulnerable, underlining the need to reduce illegal logging and other large-scale human disturbances of forests in the Amazon, as well as investments in fire-fighting capabilities in the Amazon.

Professor Jos Barlow, the principal investigator of the research, said: ‘The results highlight the need for action across different scales.

‘Internationally, we need action to tackle climate change, which is making extreme droughts and fires more likely. At the local level, forests will suffer fewer negative consequences from fires if they are protected from degradation.’