Coronation Street, the UK’s longest-running soap opera will feature a storyline highlighting the impact that air pollution is having on children’s lungs up and down the country.

In a scene to be aired on Monday night (August 23), 12-year old character Liam Connor Jr will be seen fighting for his breath as paramedics travel through Weatherfield’s highly congested streets and double-parked cars to reach him.

Once at the hospital, Liam, accompanied by his mum, will learn that he has suggested an asthma attack, which doctors believe could have been triggered by air pollution from traffic fumes.

Asthma UK and the British lung Foundation advised Coronation Street’s scriptwriters to ensure that the storyline delivers an accurate and responsible trial of a child having an asthma attack. 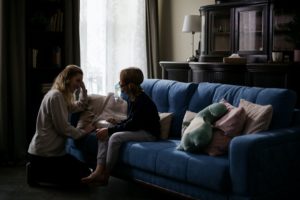 Sarah Woolnough, chief executive of Asthma UK and the British Lung Foundation, said: ‘Air pollution is at lethal levels in many parts of the country and not enough is being done to make people aware of the damage it is doing to their health and to tackle the problem. For people with existing lung conditions, it can trigger life-threatening asthma attacks.

‘Being able to raise awareness of the issue with Coronation Street’s large and diverse audience is a dream come true. Particularly now, when the UK government can help to protect everybody’s health by committing to world-leading air pollution limits, in line with World Health Organisation (WHO) guidelines.’

‘We all have our part to play in reducing harmful levels of air pollution and one way to do that is to campaign to raise awareness of air quality issues impacting people’s health in your local area, like characters Sally and Maria.’

John Whiston, managing director of continuing drama and head of ITV in the North, added: ‘Clean air is an issue that affects us all wherever we live but particularly a small urban street like Coronation Street.

‘So it felt right to look at the wider environmental issue through Liam’s asthma and traffic on The Street. Hopefully, as well as being an issue that provides drama and divides our community, it also throws a light on what we can all be doing to clean up the air we breathe.’