Plans to develop a new runway at Heathrow Airport could delay the UK’s compliance with EU air pollution limit values a government report has claimed.

Published yesterday (24 October), the report takes into account the impact of building a second runway at Gatwick, an extended northern runway at Heathrow, or a third northwestern runway at Heathrow, and the likely impact each of these could have on compliance with EU air pollution limit values in light of the Air Quality Plan published in July.

The report is titled: “2017 Update to Air Quality Analysis: Impact of 2017 air quality plan and associated climate mapping sensitivity testing” and was written by Cardiff-based consultants Parson Brinckerhoff, now known as WSP, for the Department for Transport. 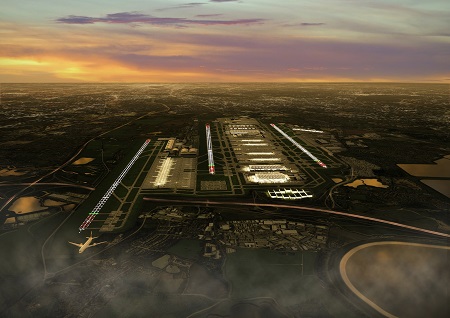 The government’s preferred option at present is for a third runway to be built at Heathrow, as it claims this will double freight capacity at the airport and allow businesses across the country the opportunity to boost their exports.

According to the government, planning consent for a new runway will only be granted if it can be delivered in accordance with air quality and climate change obligations.

In light of the report, government has opened a consultation until 19 December to consider and respond to new evidence which also takes into account noise and biodiversity impacts.

It suggests that a new, third Heathrow runway “does not impact on modelled compliance with limit values in any potential opening year (2026 onwards),” when taking into account the actions set out in the 2017 air quality plan. However, the report adds that given the ‘inherent uncertainties’ in air quality modelling, there remains a risk that the option could delay compliance with limit values.

The report states: “The risk of an impact on compliance with limit values increases the earlier the assumed opening year for the option,” adding that the risk of compliance is high up to 2029 as it potentially impacts on compliance in central London.

“From 2030 onwards, the risk falls to medium.,” the report continues. “The level of risk is primarily dependent on the timing of the introduction of, and effectiveness of, actions in the Government’s 2017 Plan to reduce emissions from vehicles on the wider road network, together with effective RealDriving Emissions (RDE) legislation.

“It is largely independent of assumptions relating to the impact of the option itself or the direct mitigation of option-related emissions. Impacts near the airport do not, in general, affect zone compliance. Additional measures aimed at targeting high nitrogen dioxide (NO2) concentrations at the local level and across London could potentially mitigate this risk further.”

Commenting on the proposals, Transport Secretary Chris Grayling said: “Airport expansion is one of the most important type of infrastructure project for the UK – both in boosting our economy and jobs and promoting us on the world stage.

“Leaving the EU is a new chapter for Britain and provides us with a great opportunity to forge a new role in the world. We are determined to seize that opportunity and having the right infrastructure in place will allow us to build a more global Britain.

“The case for expanding Heathrow is as strong as ever and we want to hear your views on it. This is an important consultation and I encourage everybody to get involved across the UK.”