The government’s target of ending the sale of petrol and diesel by 2040 could be brought forward, according to Grant Shapps.

Speaking today at the Conservative Party conference in Manchester, the transport secretary said he would like to ‘thoroughly explore’ the case for bringing this date forward.

‘The government’s advisory Committee on Climate Change has said 2035 is a date for which we should aim,’ Mr Shapps told the conference.

‘We will need to test the arguments and work in partnership with industry to examine how to proceed.’

The transport secretary also touched on the recent acceleration in electric car use.

‘As I drove up to Manchester in my family’s electric car, I found it easier than ever to plug-in and charge up,’ he said.

‘That’s because there are now more charging locations than petrol stations. But we must go further to protect our environment and improve our competitive edge.’

Responding to Mr Shapps’  announcement, Mike Hawes, chief executive of the Society of Motor Traders and Manufacturers, said the government must better support carmakers to move towards low and zero-emission vehicles.

‘Ambition must be matched by measures that support industry allowing manufacturers time to invest, innovate and sell competitively. This includes long-term government commitment to incentives and investment in infrastructure to accelerate the uptake of these new technologies.’ 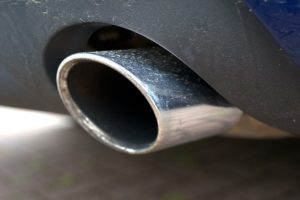 Chancellor Sajid Javid has also announced the creation of two ‘all-electric bus towns’ as part of a £220m package of funding to overhaul bus services at the conference.

And the housing secretary Robert Jenrick has announced the government will create a national design guide for new homes and developments, which will put an emphasis on green infrastructure.

Mr Jenrick said the new guide would empower people to make sure that development works for them, in keeping with the ‘local heritage and vernacular, with each new street lined with trees’.

In August, the Science and Technology Parliamentary Select Committee said the government should ban the sale of petrol cars and vans by 2035 and phase out personal vehicle use if the UK is to hit its legally binding 2050 net-zero carbon target.

The Green Alliance’s policy director, Dustin Benton said: ‘Our research shows that bringing forward the 2040 ban on new petrol and diesel powered vehicles to 2030 and backing it with a zero emissions vehicle mandate would cut air pollution by at least a sixth by 2025, halve UK oil imports and help to put the UK on track to its net zero climate goal.

‘There really is no need to examine this further. It has already been explored thoroughly and is supported by a wide range of organisations as diverse as Shell and the Committee on Climate Change. It’s great that Grant Shapps loves his electric car – he should act now and make them available to everyone.’