In the UK, as many as 36,000 people die prematurely every single year as a result of exposure to air pollution. But like with many things, the burden of this suffering does not fall equally across communities.

Indeed, research conducted for Air Quality News by Shona Wilde and Will Drysdale, postdoctoral researchers at the University of York, reveals that across London areas with higher annual average nitrogen dioxide (NO2) concentrations also have higher rates of deprivation in terms of crime, unemployment, income and living environment. 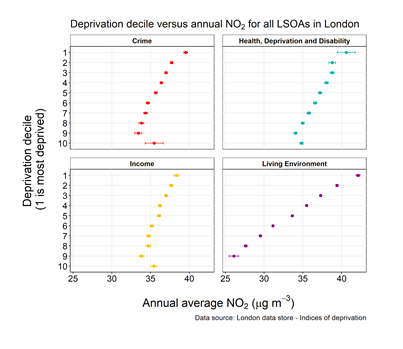 Figure 1. Mean annual averaged NO2 (from the London Atmospheric Emissions Inventory) for each deprivation decile for selected domains of deprivation (from the Ministry of Housing, Communities and Local Government) across all Lower Layer Super Output Areas (LSOA) in London. A deprivation decile of 1 represents the most deprived 10% of LSOAs nationally. Error bars represent one standard error above and below the mean.

The strongest correlation was with the living environment domain – which is to be expected as this index contains an air quality component, and poor air quality is well known to affect human health, but the correlations with other domains suggest that air pollution has broader links to other aspects of our lives.

In order to understand why this is the case, Air Quality News got in touch with Dr Jo Barnes, senior research fellow at the Air Quality Management Resource Centre at the University of the West of England, and who is a renowned expert in this field.

‘We don’t really know whether deprived areas are subject to busy roads and polluting industries because they are already deprived, or whether it’s the presence of those things that devalues these places.’

‘But ultimately, what’s happening here, is the people who have the least agency to be able to change their circumstances are ending up in areas that are the poorest and the most deprived, and those tend to be the places with the busiest roads or most industry, because the people who can afford to move away from those places, do.’

This is causing something which researchers have called the triple jeopardy effect. This refers to a situation where populations of low socioeconomic status are exposed to higher levels of air pollution because of where they live or work, this is leading to increased susceptibility to poor health and as a result is causing health disparities that are driven by environmental factors.

‘People living in deprived areas are already more likely to have pre-existing health conditions because of their circumstances, such as living in damp conditions or working in a hard–labour job,’ she adds.

‘If you put air pollution on top of that, it’s exacerbating the health impacts that they are already facing.’

According to Dr Barnes, the best way to reduce these impacts and close this gap is to focus on policies that affect more affluent communities.

‘Recent research we conducted revealed that it’s not those who are exposed to the air pollution who are causing it.’

‘This means that targeting policies at more affluent households may not be such a bad thing, perhaps in fact, it’s the best place to start.’ 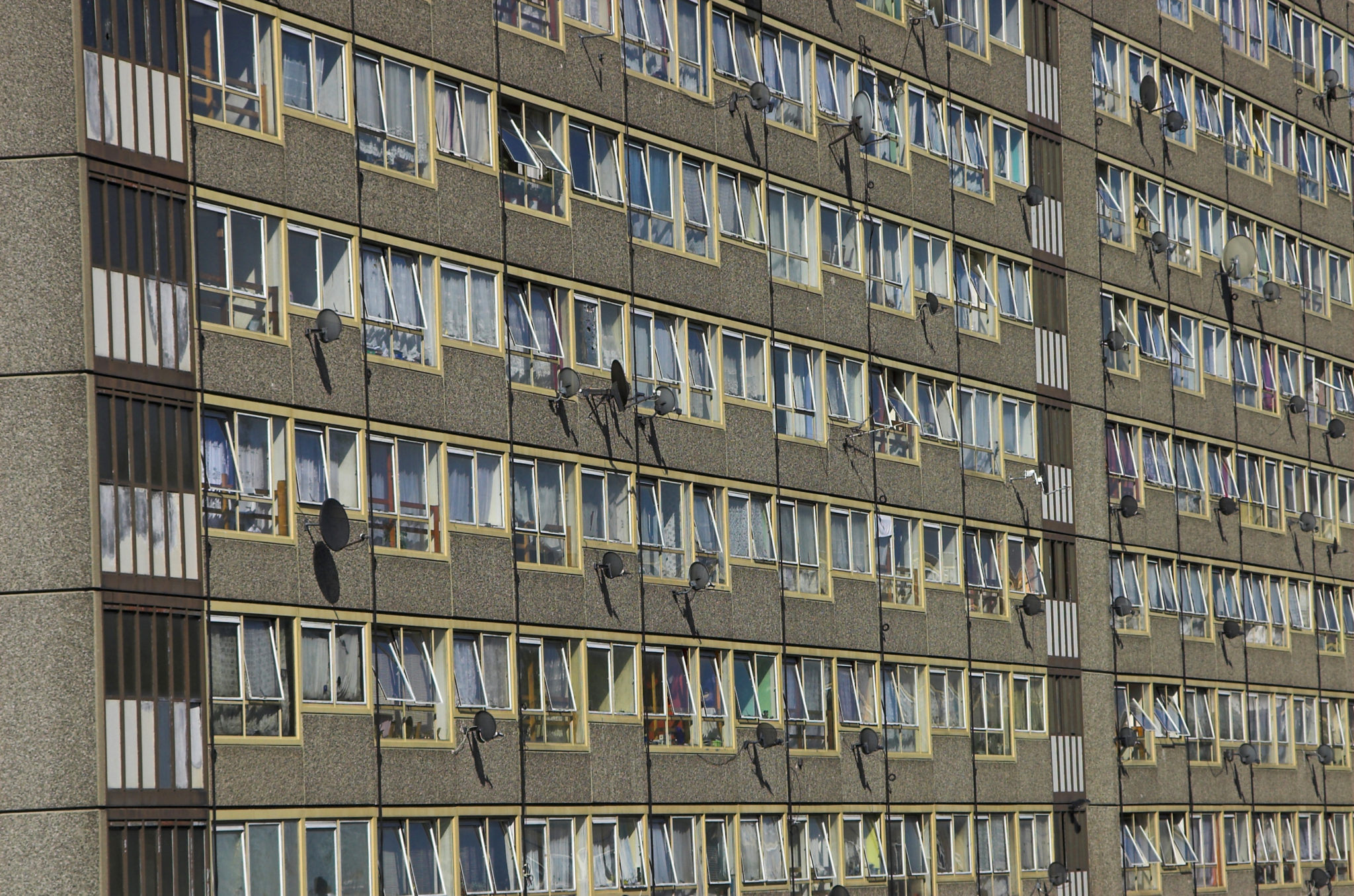 When it comes to these inequalities, it is important to highlight that this is not just a wealth issue, but in fact the issue goes much deeper.

According to researchers at Imperial College London, the most ethnically diverse neighborhoods in the UK have the highest levels of air pollution. Even after allowing for the fact that some of these neighbourhoods are more deprived, the researchers found that there was a difference of 3.0 µg/m3 for particulate matter (PM2.5) and 10.1 µg/m3 for nitrogen oxide (NO2).

17-year-old Destiny Boka Batesa, one of the four co-founders of the clean air campaign group ChokedUp tells Air Quality News about her lived experience of growing up in South Norwood, Croydon, an area with high levels of air pollution and where 59% of the residents belong to black, Asian or minority ethnic groups.

‘Growing up my sister and a lot of my friends suffered from asthma and other respiratory illnesses,’ says Destiny.

‘I remember walking to school and noticing the cars parked with their engines running, or the ice cream van humming in the playground.’

‘But it was only when I grew up and got involved in the climate movement that I drew the connection between my sister and friend’s illnesses and the air pollution where we lived.’

‘If you grow up in a more deprived area, this depletes your quality of life straight away, if you then add air pollution on top of that it means that we are struggling a lot more than necessary, and the racial element of this cannot be ignored.’

‘Creating ChokedUp has given me a meaningful way to channel my anxiety but in the long term I hope to see amendments to the Clean Air Act to ensure that we all have our voices heard. I want to see active measures put in place to ensure that black and brown, or deprived communities of any kind, are not overshadowed, I want to ensure that all of our lives are valued and protected.’

This problem continues with the Covid-19 pandemic which has made these issues worse by deepening inequalities. According to researchers at University College London (UCL), half of those who were struggling financially before the lockdown now say that their situation is ‘much worse,’ whereas only 20% of those who were financially comfortable pre-Covid now feel they have become worse off.

Not only has the pandemic deepened these financial inequalities, but it has also highlighted the racial inequalities present throughout the UK. Data from the Office for National Statistics (ONS) revealed that black male citizens are four times more likely to die from Covid-19 than their white counterparts. This is reportedly due to many compounding socio-economic factors, from access to health and social care to living in more overcrowded households.

But one factor which cannot be ignored is air pollution, air pollution causes a wealth of respiratory conditions, and indeed a growing body of research has highlighted that exposure to air pollution may increase the risk of dying from Covid-19.

Imogen Martinea, UK portfolio manager at the Clean Air Fund, says: ‘Across the board the pandemic has highlighted and also exacerbated inequalities.’

‘Far too often the negative impacts of a policy are felt by those who are the least able to shout about it. As we come out of the pandemic, we need to put social justice at the heart of our actions. We need to engage with communities in ways that are meaningful, not just tick–box consultation exercises.’

‘Going forward, it’s about making sure that all voices are heard by finding the space to bring people together.’

‘We need to come up with the solutions to air pollution with a social justice lense.’

Going forward, The Clean Air Fund is looking at a number of ways to engage with communities and are currently assisting Guys and St Thomas charity on their work to reduce air pollution in low–income communities across London.

But there is still much more work that needs to be done, as Destiny states: ‘When you live in a country that is indifferent to your personal issues because the people who are running it don’t face them themselves it is incredibly difficult.’

‘We need to see actual change and to do that we need to put pressure on the government and the people in authority to make sure that they understand that our problems are important.’

‘This is a problem we are facing now, we faced it yesterday and without change, we will continue to face it tomorrow.’